Ultra Music Festival hosted its first full festival event in Australia this past weekend, headlined by The Chainsmokers, Martin Garrix, and Marshmello. The event was held over two days, once in Sydney and another day in Melbourne.

Among those performing was Australian Melbourne bounce artist Will Sparks, who has become the subject of multiple accusations of misconduct at the festival.

According to an assistant tour manager for one of the major artists performing, who requested anonymity (henceforth referred to as ATM), Sparks was hanging out with their artist in their trailer before showtime. As they were going to be taken to stage, ATM poured everyone in the trailer a shot so as to move them outside and clear the room. As ATM was cleaning up, Will and some girls reentered the room for more drinks.

“I let them pour another but told them I’m closing everything down,” ATM told Your EDM via Instagram DM. “They stayed in the doorway to keep me from closing. I politely asked them to move and closed the first door of our trailer and instantly started to be taunted by Will.

“Hey guys, I’m just doing my job, I gotta close up here,’ is all I said. It was followed by calling me a stupid cunt and bitch.”

The rest of the interaction apparently proceeded in much the same way, with ATM trying to close up and Sparks becoming increasingly confrontational and irate.

ATM continues, “I shook it off with a ‘whatever dude.’ Right as I’m about to close the 2nd door he runs up and punches it. I was unsure what happened and swung open the door like ‘what the fuck was that.’ He continued to call me fucking cunt, an ugly bitch, etc.”

Ultra artist relations, as well as Sparks’ manager, eventually came over to help while he continued to act aggressively toward ATM.

Yo if you can’t handle your alcohol don’t fucking drink!!

Acting like a raging baboon, hitting shit & abusing women who are simply just trying to just do their job for the HEADLINE artists at the festival is disgusting. All I can say is thank fuck Melbourne bounce is dead 😌👋🏼

Posts from Clancy Silver, currently tour manager for The Chainsmokers, and Tobias Wang (@visualbass), a photographer who’s worked with The Chainsmokers, Zedd, and more also echo the feelings and account given to Your EDM epresentatives for Will Sparks have not returned a request for comment at time of publishing. We have made Ultra aware of these serious accusations and will update with their response. by ATM. 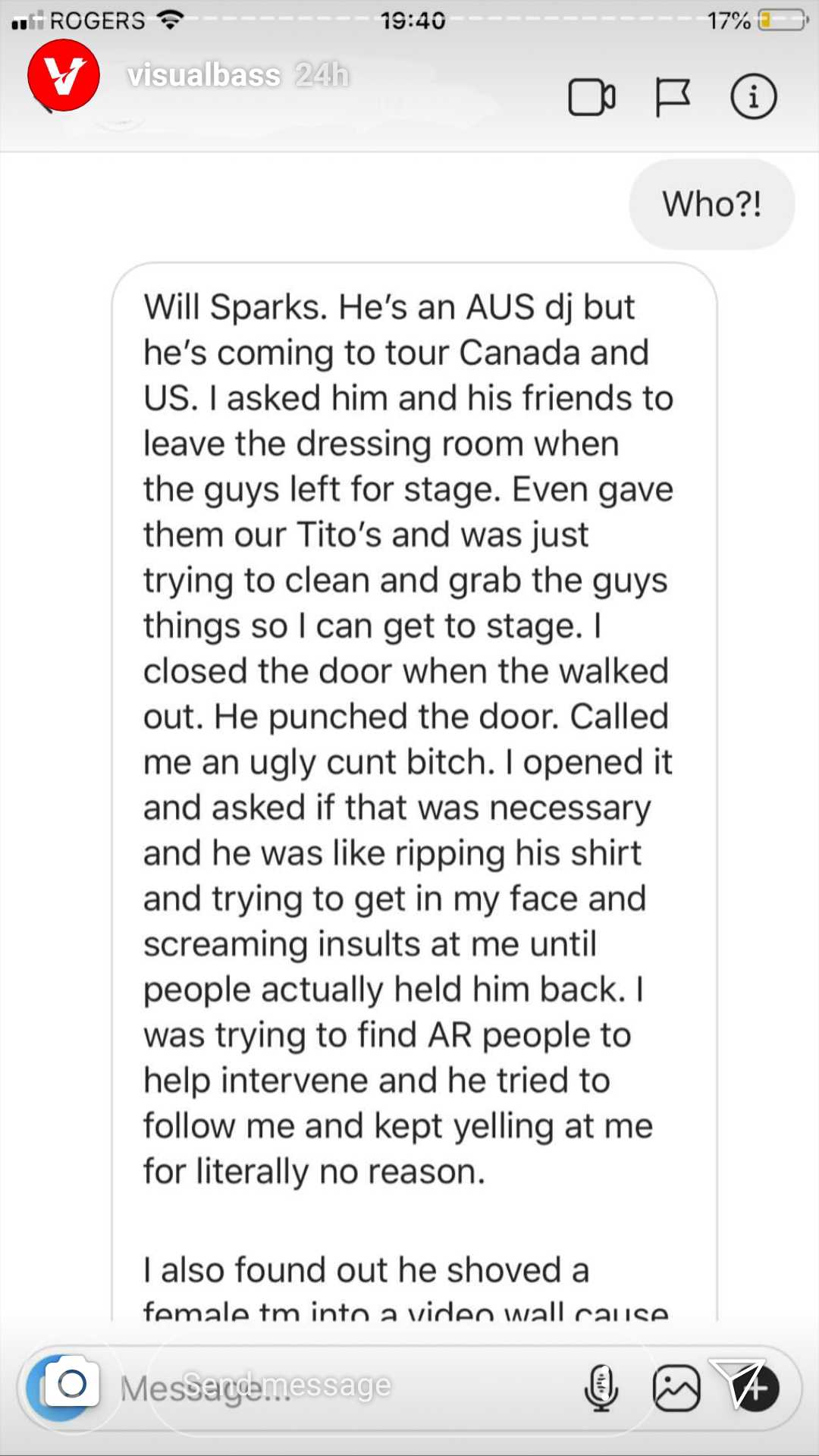 Representatives for Will Sparks have not returned a request for comment at time of publishing. We have made Ultra aware of these serious accusations and will update with their response.